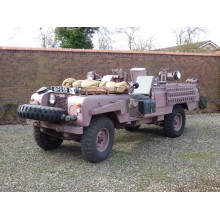 A very rare chance to own one of very few genuine Land Rover series 2A's speciality designed for use by the Special Air Service (SAS).

This has been in our collection since it was released from the military in 1986.

Comes with a copy parts book and handbook along with a complete equipment schedule and illustrated spare parts for the body.

The Pink Panther was developed in 1968 for the British SAS. Designed specifically for long-range desert patrol, it was based on a standard military Land Rover with a 109" wheelbase. Marshalls of Cambridge were contracted to make the modifications and 72 were built, with approximately 20 survivors.

- Series 2A SAS Land Rover (Pink Panther) For Sale.
Not Sure?
Contact form